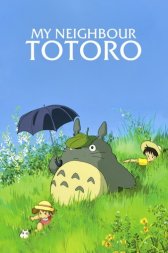 My Neighbor Totoro
Japan, 1988, 86 minutes Animation, Fantasy, Family, Anime, Childrens
My Neighbour Totoro has a special place in my heart. Aside from being a wonderful film, it's also because I grew up with this film and have a personal attachment to it, and as I used to watch it in my grandmother's house all the time, it's a film that hits home every time.

Unlike Miyazaki's two previous films, instead of being set in a fantastic world, this is a real world setting with fantastical elements. It carries elements of Alice in Wonderland, from Mei falling down a “rabbit hole”, to the Catbus resembling the Cheshire Cat. What’s brilliant about the story is that while the magical elements are there, the very rural landscape IS the Wonderland of the story. From the children’s perspective, the interaction with the environment and the natural textures and landscapes is a whole new experience to them. Smaller details that seem mundane to us now are enhanced through very subtle movements, like tadpoles swimming in the water or a snail going up a plant. As I said, this film hits close to home, because it was during the time I was experiencing nature for the first time, especially during my grandmother's house. In a moment very similar to a scene to the film, my grandmother had a garden where me and my sister got to pull out vegetables. It’s a very nostalgic feeling, because it reflects our first interaction with nature as children, which tends to be our first experience with the world. While it seems unexciting to us now, the way nature is animated feels very new, just like any child would experience anything.

Strangely enough, this film is not about nostalgia. In the book "Starting Point" which contains all of the articles Miyazaki wrote, he mentioned that Totoro wasn't a nostalgia piece. This film was made as a reminder of what we take for granted: our relationship with nature. He does this by presenting nature through the eyes of children, and we remind ourselves of the first time we interacted with the world around us. It's a wonderful experience, and Miyazaki is giving us a way to look back at that and thus appreciate nature even more. Totoro serves as that embodiment of nature, and his friendship with the girls is the kind of relationship Miyazaki wants us to have with nature itself. That's one of the reasons this film is so remarkable.

Satsuki and Mei are very believable character: both are young sisters who love each other and have playful personalities, however Satsuki, the eldest, is closer to adulthood, and thus more aware and responsible. This film also mirrors a moment in Miyazaki’s life: his mother was under an illness, and he struggled a lot with that during his childhood. Thankfully his mother was nursed to health up until her death at an old age, but what Miyazaki shows here is a child experiencing the fear of their parents dying. Satsuki, is forced to grow up faster and become the mother figure of the family, which becomes a very hard thing to do because she's forced to prepare for an event that might occur sooner than other kids are meant to understand in their lives.

A very down-to-earth and mature film, yet also a very sweet and innocent film, My Neighbour Totoro is one of Miyazaki's best films. It may not have as much action or conflict as other conventional family films, but it's a true slice-of-life.
Like this Review?
Write your own review?
DooVOTE
Not for me
Like this Review?
Write your own review?
COMMENTS 1
Your Comment...
LIKES 2
MaeMaeDecena
ClaudineC
MaeMaeDecena
ClaudineC