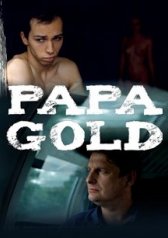 Papa Gold
Germany, 2011, 77 minutes, SD Drama, Arthouse
Entertaining and funny!  This movie about a carefree and sex-crazed young man named Denny who's visited by his stepfather Frank to convince him to visit his estranged mother has its light and funny moments with some scenes that will quite disturb you.  What I particularly noticed was the musical score,  quite weird but somehow was  a great fit that sets the film's quite absurd notions. Noticed at least two minor characters in this film that were also part of another movie, one was Axel  Ranisch who plays the role of the dentist Zahnarst, he was also in another German film titled "Love Me"; the other one was Martina Schone-Radunski (she plays one of the girls of Denny) who was also in another Tom Lass-directed film, "Kaptn Oskar".  While the film ends in a not so ideal way and it wasn't really cemented as to whether Denny actually reunited with his mother, but seeing him in a scene where he was holding his baby sister foretells positive things ahead.  Tom Lass, who plays Denny and also the director of this film has that quite nonconformist acting style, genuinely funny in a sometimes not so obvious way and from the looks of it,  there were elements in this film that one can relate with his Kaptn Oskar film,  such as that scene where he  hands a toothbrush to Frank.  At times weird but also a film that genuinely tries to reflect family relationships in a realistic manner.  Do check this out!
Like this Review?
Write your own review?
Add to List
Not for me
Like this Review?
Write your own review?
COMMENTS 0
Your Comment...