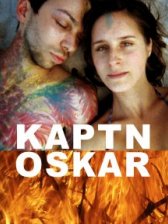 Kaptn Oskar
Germany, 2013, 78 minutes, SD Romance, Drama, Arthouse
There are some quite dragging moments in this film but there are important messages that it aims to convey to the viewers, like the effects of being in a bad relationship such as that of Oskar and his ex gf who seems to be pestering him still. However, I was amazed with the acting performance of Martina Radunski as Alex, she has strong presence on camera, she has sharp features and she throws her lines with conviction. No wonder, she got an award for her performance in this film at the Oldenburg Film Festival in 2013. I was impressed with the opening scene,  with Alex seen burning Oskar's place, to the tune of a very upbeat music that sounded like  a heavy metal song but with strains of a ritual-like song. Amelie Kiefer as Masha was also outstanding and she has fine facial features that makes her look angelic at times. Equally commendable in terms of acting was Tom Lass as Oskar, interestingly he is also the director and co-writer of this movie. Of the  3 characters, Masha has the most complex and mysterious one, not much is said about her although it was undoubtedly clear that what she needs is a father figure more than a stable relationship. In fact I find it a queer contrast; she goes to bed with older men and yet can't or won't get into a serious relationship with them (maybe all of these old men she goes to bed with are all committed/married), on the other hand, she is quite committed to Oskar and even role-plays being his mother and yet they don't have physical contact other than kissing and their "breast day".  However, I do find that the complexity and queerness of the characters contribute to making this movie a somehow memorable one. There are admirable ideas in the movie and while at times the viewers wonder why there are a couple of adult scenes what becomes more pronounced are the relationships that occur during the film's entirety. Do check this out!
Like this Review?
Write your own review?
Add to List
Not for me
Like this Review?
Write your own review?
COMMENTS 0
Your Comment...