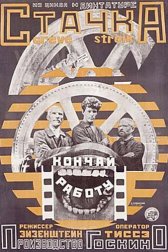 Strike
Russia, 1925, 82 minutes, SD Drama
There are metaphors and symbolisms in this movie that the director uses and one of these would be that scene where workers are shot down and on to cattle that were slaughtered and another would be in that scene of two kids dancing on a table during an interrogation scene. There are scenes that one will find quite horrific but a reality when strikes occur.  Most if not all of the scenes feature crowds of people and  even though it's a silent film the musical scoring somehow makes up for the absence of dialogues.
Like this Review?
Write your own review?
Add to List
Not for me
Like this Review?
Write your own review?
COMMENTS 0
Your Comment...