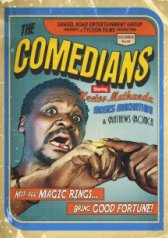 The Comedians
South Africa, 1985, 86 minutes, SD Comedy, African
Viewers will watch this film hoping that this will make them laugh just by judging by the title. However, there were scenes that seem to drag and have the tendency to bore the viewers. There are some funny conversations though and the actor who played the role of Bhona was hilarious at times, a  familiar face amongst the African films I've seen lately.
Like this Review?
Write your own review?
Add to List
Not for me
Like this Review?
Write your own review?
COMMENTS 0
Your Comment...