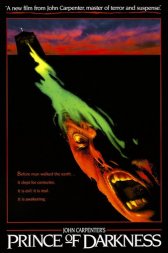 Prince of Darkness
USA, 1987, 101 minutes Horror
The first of Carpenter's return to low-budget filmmaking, what's interesting about this film is not so much the green splooge-spattered, mirror-smashing hokum that fills out the second half, but the interesting premise of an alternate universe that exists in parallel with our own, the horror and fantastical in quantum physics, and how lesser beings, such as ants and (rather offensively) homeless folks, are exploited by it. It's pretty rich stuff, which I suppose is swept under the carpet to make way for the more commercial genre trappings such as a woman spewing into another woman's mouth - after all a movie's gotta put SOMETHING in the trailer to make a buck, huh? Anyway, a bizarre film that doesn't quite work but is a lot of fun.
Like this Review?
Write your own review?
DooVOTE
Not for me
Like this Review?
Write your own review?
COMMENTS 0
Your Comment...
LIKES 1
snakeeyes
snakeeyes