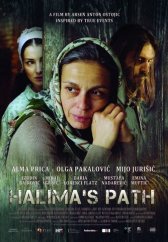 Halima's Path
Bosnia and Herzegovina, Croatia, 2012, 105 minutes Drama, Drama
One only has to die. One also has to live… I can’t live like this anymore. Oh what a deep story. If you’re not in the mood for deep emotions, you might want to wait for this film as you will be hit by big emotional punch – guaranteed. After seeing it, I highly recommend you be in the right state of mind and mood to watch it. Inspired by true events, “Halima’s Path” is a story about a woman named Halima living in Bosnia before and after the war. Although it might appear like a war movie, this film isn’t about war at all.

Halima is married to an open-minded, respectful and loving husband (something quiet rare in those times), they had a farm and her life seemed just fine. However, Halima is a Muslim. As the war between Serbs and Muslims commeces, Halima’s life is about to change for ever. The film isn’t afraid to show you the real crude suffering experienced byt eh people during that time. Already from the first scene we see the harsh reality as Safija who is a relative of Halima, runs to her home crying as she finds out she is pregnant with a Serb and is afraid her father will kill her for that. Halima and her husband however, give her all of their support as they understand Safija is actually in love with he baby’s father. Through a series of unfortunate events, Halima is left with Safija’s baby boy to raise as her own. she calls him Mirza. A Few years later the Yugoslavian war breaks out and the only two persons Halima has ever truly loved – Mirza and her husband, get killed by the Serbs right in front of her. The film follows Halima’s story as years later she tries to find closure for the passing of her son, embarking on a journey to find Mirza’s real parents. We soon learn that what she uncovers here is just the beginning. The film depicts a realistic side to the brutality and incredible loss suffered during the war, a deep and heavy emotional roller-coaster sure to make you stop and think.
Like this Review?
Write your own review?
DooVOTE
Not for me
Like this Review?
Write your own review?
COMMENTS 0
Your Comment...