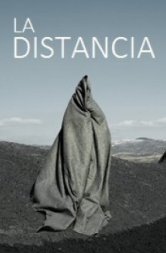 Catalan director Sergio Caballero’s surrealist crime caper The Distance (La Distancia) is unapologetically left of field. In fact the film, an atmospheric heist movie with a healthy hint of Tarkovsky’s Stalker (and follow-up to 2010’s Finisterrae) is so left of field that it is practically outside the stadium and hiding out one town over. Superficially, The Distance is an easy sell – three telekinetic dwarves (each with their own unique super-powers) are hired to steal The Distance by an imprisoned performance artist – all under the nose of a dimension shifting mutant security guard.
But the reality of The Distance is a little different, and while the weirdie-fest of a cast (including a haiku composing bucket of smoke) is likely to suck you in, the slow, extended takes, minimal dialogue and polarising deadpan humour is just as likely to spit you back out. Those looking for the traditional payoff of a heist movie will either be instantly disappointed or pleasantly surprised by the film’s departure from genre, and The Distance would not seem out of place screening on a loop at any modern arts museum.

Equally museum worthy is Marc Gomez del Moral’s digital cinematography – each frame of The Distance is easily capable of becoming part of a resident exhibition of acclaimed photography – the fixed camera catching precisely organised shapely clusters of characters and objects against the background of a bleak, almost volcanic industrial wasteland (the director’s native Spain standing in for a post-Soviet Siberia). Borrowing repeatedly from the atmospheric machine graveyards of Tarkovsky’s Stalker as well as the unnerving weirdness of Lynchian surrealism, The Distance is able to create (with the addition of Caballero’s eccentric cast) its own unique universe for itself – with hints of backstory and history explained only just as much as they should be.
The film, only 80 or so minutes, feels longer – the movie crawling forward as the trio of dwarves plan their heist, prepared over seven days of build-up. There is an air of tension aided by the long, unbroken takes and the murderously timed creeping soundtrack, but “The Distance’s” principal export (as with Caballero’s previous feature, Finisterrae) is a unique sense of oddball, deadpan humour that could only survive inside art house cinema – you will likely either enjoy it, or be tortured by it.

The Distance might take longer to understand than it does to watch – but trying to ground its imagery and characters in understanding seems ultimately self-defeating – there is a possibility that nothing carries a weight of meaning at all – of purposeful superficiality pretending to be something more. By the end it seems better to experience than to understand, but if you’re laughing at The Distance, there is a chance that it’s laughing at you, too.
Like this Review?
Write your own review?
DooVOTE
Not for me
Like this Review?
Write your own review?
COMMENTS 0
Your Comment...