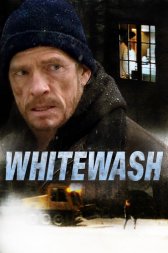 Whitewash is a cold thriller with dark comedy edge set in the snow filled forests of Northern Quebec. Thomas Haden Church does a great job in his portrayal of Bruce, a broken man who is fuelled by alcohol. The film depicts the natural friendliness and kindness of Canadian culture and the consequences of when someone breaks the trust and kindness of another. This is what happens to our underdog Bruce. Director Emanuel Hoss-Desmarais gets straight into the nitty gritty as far story line goes. There is no unnecessary character building before we witness Bruce running over a man with his snowplough – he panics, covering up the body and eventually blacks out ending up stuck deep in the middle of the forest.

Director Emanuel Hoss-Desmarais technique is to show Bruce’s present situation trapped in bleak and dangerous surroundings and inter-cutting them with scenes of Bruce’s not so distant past, gradually establishing his relationship with the man he has killed. Bruce finds himself imprisoned in the forest with his vehicle. Consumed by guilt he must focus on surviving – both for his life and freedom. He doesn’t want to face the consequences of his mistake. There are dark yet humorous moments as Bruce becomes more isolated, slightly delirious from dehydration and lack of food. Paranoia kicks in as he tries to cover his tracks and survive the harsh weather conditions.

We are replaying the past as Bruce is thinking about it in the present. He is telling us the story through his frame of mind. We soon learn that the victim Paul was also a broken man, and he gets worse and worse as we relive more of Bruce’s past. Bruce seems eternally trapped in an ice capsule with the feeling of guilt and the fear of facing the real consequences. The film demonstrates, however, that his self-made prison is the consequence he must live through.
Like this Review?
Write your own review?
DooVOTE
Not for me
Like this Review?
Write your own review?
COMMENTS 0
Your Comment...