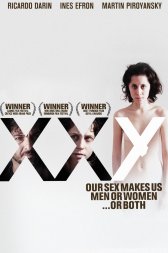 XXY
Argentina, 2007, 86 minutes, SD Drama, LGBT, Arthouse, Coming of Age
A critically acclaimed film that garnered 4 awards from the Cannes Film Festival, director Lucia Puenzo explores  the conflicts and struggles of an intersex person as well as the effects within the family and even that of the community.  The scenarios are interestingly complex and Ines Efron as Alex seems to be likened to the marine animals under the watch of his marine biologist father; observed and experimented upon. Alex' dilemma where it concerns the gender of her choice is something that viewers would have to take note of in this film. Efron's performance is commendable and nevertheless receives ample support from the cast notably from her parents portrayed by Ricardo Darin and Valeria Bertucelli and Martin Pirayansky as Alvaro, the young man she gets close and intimate with.  Watch out for that intimate scene between Alex and Alvaro which raises countless questions with regard Alex sexual preference. Compelling and a challenging story!
Like this Review?
Write your own review?
DooVOTE
Not for me
Like this Review?
Write your own review?
COMMENTS 0
Your Comment...