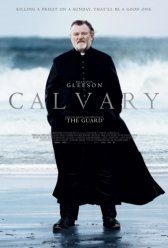 ‘Calvary’ pitches itself as a black comedy. This is probably putting it lightly. The follow up to McDonagh’s wildly successful debut ‘The Guard’ (2011), ‘Calvary’ unites a cast of Ireland’s finest to tell a deeply dark tale about faith, forgiveness and murder.

From the first scene, ‘Calvary’ is a brutal film. Father Lavelle (Brendan Gleeson) is confronted at confession by a man who, as a child, faced years of sexual abuse at the hands of a long-dead priest. He can’t kill his abuser, so he’s going to kill Father Lavelle – kill a good priest, he reasons, and people will notice. He gives the Father a week to set his affairs in order. Through the week that follows, the Father tries to guide the members of his church through their moral and religious problems, all while comforting his troubled daughter and wrestling with his faith in the face of his own mortality.

We all know Brendan Gleeson can act, but his turn in ‘Calvary’ rises above and beyond. Father Lavelle is a good man in a town of profoundly cynical, cruel characters. He is at turns funny, thoughtful and deeply compassionate, yet he wrestles with the mistakes of his past and struggles to comprehend the spiteful actions of his congregation.

The people of his parish are guilty of all manner of sins – the butcher Jack (Chris O’Dowd) denies beating his wife Veronica (Orla O’Rurke), who is sleeping with the mechanic Simon (Isaach De Bankolé). The atheist doctor, Frank (Aidan Gillen), mercilessly mocks the faithful, the rich Michael (Dylan Moran) evades the law in his lust for wealth, and the police chief (Gary Lydon) frequently employs the local prostitute. While brilliantly crafted, they are all rather unpleasant characters, and as the week progresses it seems the good Father may join their ranks. One of them – and Father Lavelle knows who – is plotting to kill him.

It would be too easy and too simple to describe ‘Calvary’ as a purely religious film. While faith – questions and crises of – play a vital role in the story, it is much bigger than that. The film wades into the murky waters of contemporary Ireland, asking questions of death, suicide, sex, love, regret, revenge, forgiveness and retribution. Similarly, it would have been easy to write Lavelle as a saint, but Gleeson plays him as a man. He does not have answers, and he never excuses the Church of its own sins, focusing instead on how he can stand by his faith and use it for good in what could be the last week of his life.

A character driven dramady, its dark tone and bleak humour are unsurprisingly reminiscent of ‘In Bruges’, the acclaimed 2008 film from McDonagh’s brother, Martin McDonagh. McDonagh (John, that is, not Martin) use the landscape of Western Ireland to dwarf the petty disputes of the town. Waves crash relentlessly against cliffs, green hills and flat-topped mountains roll endlessly on, beautiful despite the ugliness of its occupants.

‘Calvary’, while a challenging film, is a fearless kind of storytelling, tackling questions of good and evil, its comedic moments weaving an intense tale that leaves the viewer shaken, questioning their own convictions. It may be too soon to call ‘Calvary’ a modern masterpiece, but it is easily one of my top ten films of 2014. Absolutely not to be missed.