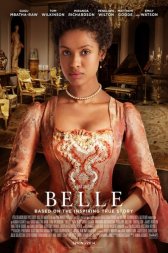 A coming of age story set in late 18th-century, “Belle” explores events leading to the verdict on Zong massacre case through the eyes of a young lady of nobility with one irreversible “flaw” that casts her aside: mixed race origin.

The film is based on a true story of Dido Elizabeth Belle (Gugu Mbatha-Raw), who is brought to the Mansfield mansion by her father Captain Sir John Lindsay (Matthew Goode) to be raised alongside her cousin Elizabeth Murray (Sarah Gadon) as a noble lady. As Dido grows up to become an intelligent, apt and sensitive woman, she has to bear with racially prejudiced, slavery-culture society.

In a Jane Austin-like feel to the story, “Belle” follows Dido and her cousin Elizabeth as they grow into womanhood and must secure their future by making a match. They both experience the reversals of fortune as Dido inherits a £2,000 a year allowance from her father and is courted by Oliver Ashford (James Norton), while Elizabeth, a poor relation to the Mansfield family, is hopelessly in love with his elder brother James (Tom Felton).

As the film progresses, political background of the film’s setting becomes equally prominent to the story, when the ladies’ uncle Lord Mansfield (Tom Wilkinson), who is Lord Chief Justice, needs to rule out a verdict on Zong massacre case. Dido’s unlikely suitor, already engaged son of a vicar, a lawyer John Davinier (Sam Reid), does everything he can to fight for justice in the courtroom – and for her heart.

The message of “Belle” will resonate well with modern audiences: don’t let others to dictate your value as a human being. As Dido gradually embraces herself, she is bound to make choices that will raise eyebrows of those surrounding her. Even more pronounced in the film is the sexism that haunts Dido and her white cousin Elizabeth alike. “We are but their property”, as Elizabeth puts it in an intimate conversation, discarded in high society almost as much as Belle, for not having a dowry.

Gugu Mbatha-Raw gives a star-making performance as Dido Belle, achieving a particularly vibrant dynamic with Tom Wilkinson in their scenes. Sarah Gadon, Emily Watson and Penelope Wilton comprise an integral part of the Mansfield household, providing important characters of the subplots of the movie. The two of the antagonists in the movie who show their contempt for Belle from the start are Miranda Richardson and Tom Felton, both extremely well trained in pulling off villain vibes.

“Belle” is a feast to the eye, with Dido and Elizabeth donning lavish period costumes (by Anushia Nieradzik) against the picturesque background of the English countryside and London gardens, as well as Lord Mansfield’s elaborate mansion (cinematography by Ben Smithard). Tone-setting, gentle to the ear musical score is provided by an Oscar-winning composer Rachel Portman.

In a fiction-blended-with-history approach, “Belle” brings both the character of Dido Belle and the aftermath of Zong massacre vividly to life in a story reminiscent of classic British literature. Think “Sense and Sensibility” with a truly unique protagonist and a twist involving a significant political event at the core of the story. And “Belle” has all the glamour that Georgian England can offer, too.
Like this Review?
Write your own review?
DooVOTE
Not for me
Like this Review?
Write your own review?
COMMENTS 0
Your Comment...
LIKES 1
MaeMaeDecena
MaeMaeDecena