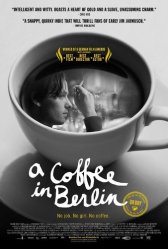 Oh Boy has been renamed “A Coffee in Berlin” for the US market and its VOD release.

Oh Boy then, is a story about Niko Fischer, a twenty-something university dropout wandering in the streets of Berlin. The search for a coffee here becomes a reason for him to encounter friends, acquaintances and strangers in the city (making “A Coffee in Berlin” sound like a pale and boring description of the film), but Oh Boy is more than that.

The film illustrates the difficulty to find one’s place in modern society where everything and nothing seem possible at the same time. Niko spends his time reflecting (“about me, about you, about everything” as he says to his father) and remains static while everybody around him is busy. It also provides an insight into the newest generation in Germany, contrasted with the old man in a bar that Niko meets.

Filmed in black and white, “Oh Boy” shows a fantastic picture of contemporary Berlin. The sweet jazzy soundtrack that follows us during the film also suits perfectly the monochrome palette .

These aspects of the film mean that it cannot avoid a comparison with Woody Allen’s early work or Noah Baumbach’s Frances Ha. Oh Boy is however more visual and melancholic than these film.

But of course Tom Schilling is the most impressive with his portrayal of Niko. From this not so sympathetic character, Schilling brings a sarcastic and comic tone to the film.

If you needed another reason to watch Oh Boy (or “A Coffee in Berlin- by now you probably have your own opinion about which works better), the film swept the German Film Academy Awards by winning 6 Lolas (including Best Film, Best Actor, Best Director).
Like this Review?
Write your own review?
DooVOTE
Not for me
Like this Review?
Write your own review?
COMMENTS 0
Your Comment...
LIKES 1
DelphineM
DelphineM