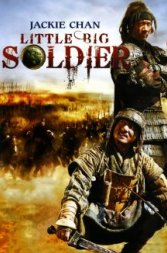 Little Big Soldier
China, Hong Kong, 2010, 96 minutes, SD Action, Adventure, Asian, Comedy
I've seen a couple of Jackie Chan movies in the past but this one has a totally unique flavor. My top faves among his movies have been Drunken Master, The Tuxedo and the Rush Hour sequels and I've seen his many other talents other than martial arts, which range from singing to dancing as well, but in here, it's totally a notch higher as this is his personal labor of love, he personally wrote the story and said to be his brainchild for 2 decades before it was finally made into a film!  What I loved about this film are the two characters; that of Jackie Chan who plays a Liang soldier and Wang Leehom who portrays a Wei general. They belong to two opposing sides and the only survivors of the battle. With the Wei general wounded, Chan bundles him up and intends to present him to claim the reward, probably a parcel of land.  This is a story about betrayal but also  of friendship and Chan and Leehom, initially enemies have to join forces to survive.  Impressive cinematography with fight scenes well-directed by Chan himself.  I immensely enjoyed the film and enjoin you to watch it , too!
Like this Review?
Write your own review?
DooVOTE
Not for me
Like this Review?
Write your own review?
COMMENTS 0
Your Comment...