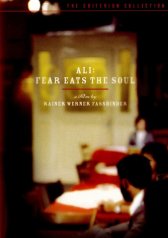 Ali: Fear Eats the Soul took just four weeks for its director/writer Rainer Werner Fassbinder to shoot. Fassbinder puts the love affair of a German cleaning lady ,Emmi (Brigitte Mira), and a Moroccan immigrant, Ali, (El Hedi ben Salem), who is more than 20 years her junior, under scrutiny. However, what’s being examined is not the authenticity of the relationship but the racial prejudice they face, and the subtle steps taken to ostracise the couple.

The film opens in a bar where we find Ali and his ‘Arab buddies’, who are interrupted by the entrance of the middle aged and out of place Emmi. The first scene, where we watch her order a coke from the disdainful barmaid, conveys each character’s loneliness. This sets the tone for the film. When we see Ali and Emmi first come together for a dance, there is some relief. Their subsequent relationship seeks to prolong this but the claustrophobic feeling of this opening is made more extreme when we see surrounding characters turn against the pair.

The changes in attitude from friends and family towards the pair are as comical as they are sad. At one point, Emmi’s fellow cleaning ladies reverse their repulsion towards Ali. The three ladies circle him like livestock, almost patronisingly admiring his physique, whilst his expression remains deadpan. Emmi watches the strange scene, satisfied by the envy of her friends. Similarly, when Emmi visits Ali at his workplace, Ali joins in with his friends in mocking Emmi’s age. In these instances we see that, when with the majority, our protagonists promote the same prejudice that they once faced. Not one of us is immune from the ‘fear that eats the soul’, as Ali warns Emmi.


Unlike Fassbinder’s grandiose and sprawling The Marriage of Marie Brau’ (1979), this film is an introverted gem. Often admired for its static form, it’s the passion and authenticity of the two leads that really sucks you in. As an added bonus, Fassbinder himself shows his acting chops as Emmi’s bemused son-in-law, in a memorable but un-credited performance.
Like this Review?
Write your own review?
DooVOTE
Not for me
Like this Review?
Write your own review?
COMMENTS 0
Your Comment...