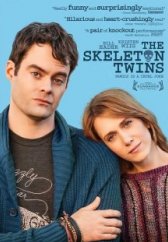 The Skeleton Twins
USA, 2014, 90 minutes Drama
It is not a dark comedy. It is a dark drama with many comedic parts. The two leads are tremendous. Wiig nailed her role and Hader became his character. Luke Wilson does not get overshadowed by the stars, either. This is well-written and directed. It only suffers from subject material that has been played before and an ending that was looking for a good way to end (a natural flow ends with a contrived finale) like the struggle with most realistic, "indie-feel" dramas.
Like this Review?
Write your own review?
DooVOTE
Not for me
Like this Review?
Write your own review?
COMMENTS 0
Your Comment...