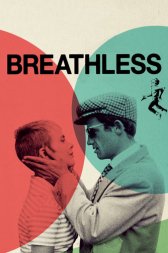 So many scenes of the film are now classic on their own - like the bedroom scene between the characters of Belmondo and Seberg. My favourite ones were the Nabokov-style interview with a French writer in an airport and a little scene in the cinema, where the director Jean-Luc Godard paid homage to another classic movie, "Whirlpool" (1949).