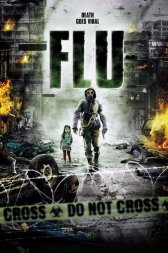 Flu
South Korea, 2013, 122 minutes Horror, Thriller, Action, Science Fiction, Disaster
After a 10-year hiatus, Kim Sung Soo, the director of the widely acclaimed Korean historical epic “Musa” (“The Warrior”), returns to bring us modern day pandemic on a grand scale. “The Flu” is not only a contemporary disaster-thriller; it also successfully manages topical front page topics such as the breakdown of the modern family, immigration matters and US-South Korean socio-political tension.

When a container of illegal immigrants from Hong Kong arrives, a highly contagious mutated form of avian flu rapidly spreads through Bandung, a suburb of Seoul with just under half a million people, after the lone survivor escapes. Opening with a cute tongue-in-cheek scene whereby good-hearted Emergency Response worker Kang Jigu meets single mother immunologist doctor Kim In-Hae on a rescue mission for the first time, the viewer could have easily have mistaken this for the start of a rom-com. Throughout, Kim Sung Soo deftly demonstrates his ease across genres, or in fact the complex interplay of genres, as the film gradually builds up tension and suspense in between comedy and a budding romance, before switching to full gear as an apocalyptic catastrophe thriller, exploding with action-packed military shoot outs and airstrikes.

Some may say this is South Korea’s “World War Z” – in fact, “The Flu” approaches the depiction of a rapidly spreading virus in a completely opposite – in fact, far better – direction than the former. In “World War Z”, the film focuses on the intimate tribulations of Brad Pitt’s Gerry Lane character as he deals with the consequence of the virus on his family - and in doing so, the film loses sight of the scale of the global epidemic that it is supposed to be about. “The Flu”, on the other hand, is only about one city as it is contained within Bandung, yet the film successfully portrays how violence and panic can quickly transcend and escalate to national and international magnitudes. At the same time, “The Flu” never abandons the intimate relationships between its characters and captures human fears and hope with great emotional intensity.

The final scene with Kim In-Hae’s daughter, Mirre, will leave you shaking in your seat long after the film ends, as you realise all this time the film was a reference to an evil that is much greater than the virus ever was, the same human greed and political evil which had resulted in the Holocaust and the Vietnam War.