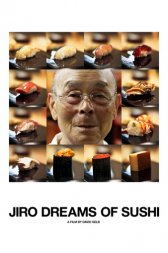 Jiro Dreams of Sushi
Japan, 2011, 82 minutes Documentary
What does it take to be the best of the best in the world? “Jiro Dreams of Sushi” is a poignant and inspiring portrait documentary on 85-year old sushi master Jiro Ono who runs ‘Sukiyabashi Jiro’, the world famous three-star Michelin sushi restaurant that seats only ten people at a time. Accessible only via an underpass to a Tokyo subway station, the restaurant serves only sushi (no appetisers, no deserts), costs at least $400 per head and guests have to make an appointment at least one month in advance. Yet it can’t be denied that anyone who has ever had the good fortune of experiencing Jiro’s delectable and exquisite craft walk away with the life-changing gratification that they have once tasted perfection.

After all, “Jiro Dreams of Sushi” is a film about perfection - about the pursuit for perfection, the sacrifices for perfection and the legacy of perfection. It tells not only about the lifelong dedication of one man to his profession, but also of the family dynamic with his two sons, the eldest and heir-to-the-family-business fifty-year-old Yoshikazu and the younger Takashi who left to set up his own mirror image of his father’s restaurant in a nearby Tokyo neighbourhood. In understated Japanese subtlety, the film highlights the pressure on Yoshikazu to carry on his father’s legacy and pays a tribute to a dwindling ancient craft which requires a lifetime of dedication and commitment from a bygone time.

As one by one the scrumptious mouth-watering sushi are placed before us like different coloured jewels on a gilded tray, we recall each piece of dedication and sacrifice that has gone into the perfect craft. We recall the two sons who had been trained to follow in their father’s footsteps instead of going to college, the apprentice who spent ten years in training and practised making the sweet omelette 200 times before weeping with tears of joy when Jiro finally claimed it was good enough, we even recall that the octopus has to be massaged for forty five minutes not half an hour.

The film opens with Jiro proclaiming, “In dreams I have grand visions of sushi”. By the end, you leave with a full and contented stomach, knowing that a life fulfilling your dreams is a life worth living.