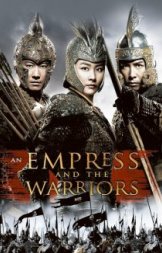 An Empress and the Warriors
China, Hong Kong, 2008, 99 minutes, SD Action, Adventure, Asian
This is another very impressive masterpiece from Director Ching Siu-Tung or Tony Ching, known for films like A Chinese Ghost Story and the Steven Seagal starrer Belly of the Beast. He also choreographed the action scenes of Stephen Chow's Shaolin Soccer and the popular film House of Flying Daggers, among others.  The battle scenes of this film were convincingly executed, with some very bloody scenes and the fight scenes especially during the empress' training with Gen. Muyong (Donnie Yen) were impressive. Kelly Chen as Empress Yen Feier has a commanding onscreen presence, her well-chiselled features (she's also a singer and commercial model in real life) was not a distraction, thanks to the metal battle gear and helmet she wore,  as she assumes the role of a ruler that has to fight alongside her men in battle. As for Donnie Yen, there's no question about it, he gave utter justice and finesse to his role as Gen. Muyong, the empress' trusted warrior and friend whom she treats as her brother. Aside from the battles and the betrayal by another high-ranking officer, Wu Ba (portrayed by Xiaodong Guo) this film also highlights love and romance between the empress and a forest hermit-cum natural medicine doctor, Duan Lanquan, played by Leon Lai, a Hongkong actor and Cantopop singer like Chen. In fact, I see his character here as a pivotal one, because he imprinted upon the empress the idea of regaining peace instead of waging war and to ultimately bring back their land as a land of glory and paradise, minus the horrors of war. Indeed, this is one movie that I truly enjoyed watching; impressive but also emotional.
Like this Review?
Write your own review?
DooVOTE
Not for me
Like this Review?
Write your own review?
COMMENTS 0
Your Comment...