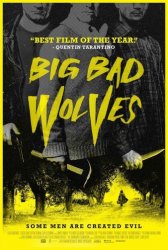 Big Bad Wolves
Israel, 2014, 110 minutes Comedy, Crime, Thriller
When you think of Israeli cinema, the last thing that comes to mind would be a comedy horror. The two directors, Aharon Keshales and Navot Papushado, whose debut film was the first ever Israeli horror now present us with a refreshing hybrid horror and thriller. If we could take one thing from the movie is that they should clearly be making more horrors.

Tarantino has named "Big Bad Wolves" his favourite movie of 2013 so when one of the most renowned film fanatics calls a small scaled, Israeli film one to watch, you know that it’s going to be something good. The movie manages to balance different genres seamlessly and the genres combine together to make a chilling and shocking thriller which is filled with comedy throughout. "Big Bad Wolves" has been compared to some big thrillers from last year such as "Prisoners".

The movie centres on a man who has been captured and tortured as he is being pinned for an unimaginable crime of killing young girls and hiding their head. The performances are so convincing in the movie that you are left doubting what you believe. The directors manage to make you feel sorry for all the characters that you are left juggling the different emotions to try and solve a crime which seems like it’s never going to be solved. The movie begins like a dark fairy tale with an eerie soundtrack, but with a social commentary, the realism makes the film even more interesting and unsettling. Big Bad Wolves is definitely not one to miss.