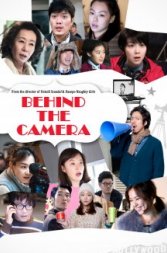 Behind the Camera
South Korea, 2012, 85 minutes, SD Drama, Asian
I found this interesting, creatively unique and somewhat reminds me of a reality game show. A director' s quest to shoot a 10-minute film with no less than a stellar cast of known actors while physically absent from the set is a wild but remotely possible idea, at least for director and writer E J-yong.  I find this peculiar but in the end, what I think mattered most was not actually in the probability of the said idea of absentee directing but more so, on the uniqueness of human nature and how each actor reacts to various scenarios and given particular stimulus like technical problems, misunderstandings among actors and director, among others, as basis. Given that the viewers can't actually pinpoint what was real and what was influenced during the film's entirety and documentary-style of presentation,  it's safe to assume that actors were subjected to some kind of looking glass. Viewers see a glimpse of how the actors react, respond and convey their ideas, both positive or negative.  This I think is some kind of experimentation that actually hits a sensitive part, it's some kind of subconscious exposition with some very genuine results. Do check this out guys.
Like this Review?
Write your own review?
DooVOTE
Not for me
Like this Review?
Write your own review?
COMMENTS 0
Your Comment...