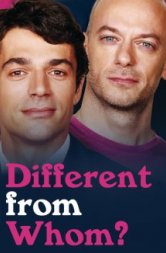 Different from Whom?
Italy, 2009, 100 minutes, SD Comedy, LGBT
A bright, snappy and fluffy comedy from Italy about a three-way relationship between a gay man, a straight woman and a bisexual man. It might seem rather slight at times, but for a film like this to come out ('scuse the pun) of a country like Italy, which is no stranger to gay-bashing, is really quite something. It's a positive film with a happy ending, with the right people getting their comeuppances. One for a Sunday night with a good bottle of red and a bucket of popcorn.
Like this Review?
Write your own review?
DooVOTE
Not for me
Like this Review?
Write your own review?
COMMENTS 0
Your Comment...