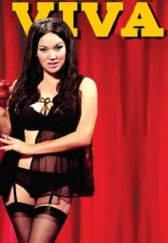 Viva
USA, 2007, 120 minutes, HD Comedy, Comedy, Erotic
It's unbelievable that this film was made in 2007, just in recent years, as it succeeded in reenacting the ambiance of the retro 60's and 70's era. Impressive production design and costumes to think this is a low-budget film, but it's convincing enough to transport viewers to that glorious era. Satirical as it is, there is an underlying seriousness in the eroticism and sexploitations depicted, and more so, with a woman in its helm, viewers are invited to take a second thought, of the role of women per se and how women are seen as just mere playthings for some men characters in the film. The film also tackles themes on lesbianism and heterosexuality and viewers get to see how the freedom and liberation of Barbi who later on becomes Viva, brought lessons and possibly realizations for these women. Truly a joyride of a movie worth checking out.
Like this Review?
Write your own review?
DooVOTE
Not for me
Like this Review?
Write your own review?
COMMENTS 0
Your Comment...