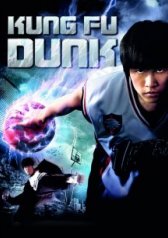 Kung Fu Dunk
Hong Kong, 2008, 100 minutes, SD Comedy, Asian, Sport
Found this quite unconventional but I was nevertheless engrossed. The film basically revolves around an orphan boy Shi-Jie (Jay Chou) who grew up in a kung fu academy. An extraordinary talent with dunking led him to become part of a university varsity team and the ball starts rolling, so to say. There are impressive basketball stunts that are well-choreographed and wire-work was quite flawless, not surprising as this film is said to have a USD 10M budget. Jay Chou, singer and actor who's known for films like Curse of the Golden Flower has got great martial arts skills. Eric Tsang as the shrewd businessman Chen-Li brings a comic charm onscreen and Charlene Choi as Lily, Shin-Jie's love interest adds spice to the movie. If you're into martial arts who also fancy ball games like basketball then this should be a must-watch.
Like this Review?
Write your own review?
DooVOTE
Not for me
Like this Review?
Write your own review?
COMMENTS 0
Your Comment...