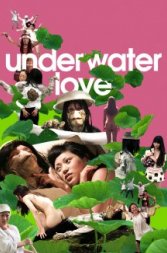 Underwater Love
Japan, 2011, 87 minutes, SD Fantasy, Romance, Asian, Pinku
This is a true-blue pink film, coming from no less than Imaoka, touted as one of the "seven lucky gods of pink", a group of Japanese filmmakers who specializes in soft-porn films. But the sex scenes surprisingly came out as tastefully done, comedic even, an example would be that  sort of rite-of-passage scene for the kappa Aoki with Asuka's co-worker, portrayed by Ai Narita. So goes with the couple of sex scenes between Asuka and fiancee and finally that of Asuka and Aoki's affirmation of their love. Very peculiar how a sexual intercourse can be done to bring back a kappa to life again, this is uniquely Imaoka, in the truest sense of the word. Acting performances  very commendable, Asuka is hilarious in a pornographic way and yes, Ai Narita, she's a pink goddess alright, viewers were genuinely amused with her very elated face upon seeing a kappa's manhood face to face. Do check out this Imaoka masterpiece especially if you're into Japanese pink films with dancing and singing on the side.
Like this Review?
Write your own review?
DooVOTE
Not for me
Like this Review?
Write your own review?
COMMENTS 0
Your Comment...