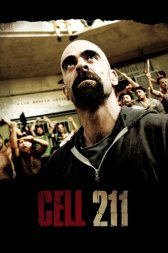 Cell 211
Spain, France, 2009, 110 minutes Action, Thriller, Drama
Adapted from the Spanish novel of the same name, “Cell 211” is about Juan Oliver, a young married man who reports to work a day early at his new job as a prison officer. During the tour of the prison, Juan accidentally gets injured in the head and left in cell 211 to get treatment, but as bad luck would have it, today happens to be the day where the convicts break loose and start a riot, led by one of the prisoners called Malamadre (translating to “Badmother” in English). The rest of the guards leave, but Juan is left stranded. He realizes that in order to survive, he has to pretend to be a convict, and manages to convince the other prisoners that he’s one of them, also befriending Malamadre.

While the stakes become higher when the situation becomes more politicized, the tension stems from wanting to see Juan survive. Juan is just a simple guy who’s married and is going to be a father very soon. But while he’s simple, he’s also very smart and knows how to act and react, which serves as an advantage.

What’s interesting is that although the film starts out as claustrophobic, it allows us to settle in this environment, as we see the main character slowly but surely become one of them.

Malamadre is played by Spanish actor Luis Tosar and does a fantastic job with the role. We get a sense that he is a dangerous man, but not insane. The same with the rest of the prisoners feel like dangerous criminals, and while they do horrible things, they never feel psychopathic. In fact, the rebellion is partly due to the prisoners wanting more rights, because of the way they’re treated in prison, and getting to know Malamadre more, we see how Juan is able to form a bond with him.

The entire film is an intense thriller with great suspense and unpredictability, and in no way does it feel generic or forced. Well paced, well cast, well directed, etc. Overall, really good film! Highly recommended!