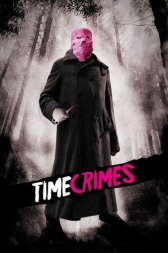 Timecrimes
Spain, 2007, 88 minutes Science Fiction, Thriller
Written and directed by Nacho Vigalondo, Timecrimes (Cronocrímenes) is a Spanish science fiction thriller. A middle aged married man (Hector) finds him self investigating a woman stripping in the middle of the woods seen from his country home. When he sees the woman laying against a rock naked he becomes very cautious and is unsure if she is alive. Suddenly he is encountered by a stranger with pink bandages wrapped around his head. Hector is attacked by the stranger and runs away, in doing so he finds sanctuary in what appears to be a science lab, he meets a scientists who convinces Hector to hide in a large mechanical device. Unknown to Hector that it is in fact a time machine taking him back one hour in time.

The film is low budget, but even with this complex plot, it is brilliantly executed. The main character is played by Karra Elejalde and he brings humorous qualities to his character. Hector must go through a series of consequential accidents and disasters in order to get himself to go back in time again so that he can go back to his life as normal. Karra shows both naivety and determination as his character goes through these events. He gradually becomes psychotic, committing crimes he would never normally do in his desperation.

The pace is slow to begin with and intensifies as the story unravels and we start to understand the motives behind each action and event. The plot is brilliantly clever and suspenseful, keeping you gripped to the story. Shot on location the film boasts very scenic settings and depicts the beautiful Spanish countryside. The settings start off very light and bright at the beginning of the film as everything is innocent and blissful at the beginning and this is transitioned well as the film progresses to darker themes.

A unique take and style on the science fiction genre with original ideas that revives the theory of time travel. The terrible consequences arisen by Hector's idiocy and cluelessness humour to what is otherwise a suspenseful thriller. Timecrimes is thoroughly entertaining.