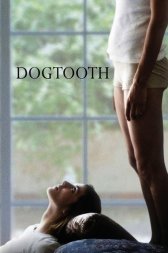 Dogtooth is a film about lies. A couple have raised their children (who were quite possibly kidnapped) to believe a series of non-truths about the world. They use incorrect words, believe that they can never leave the house and lack a basic understanding of some of the most basic facts. They are, in essence, living in a propaganda-ridden micro-nation. Within this house, the world simply cannoy be understood by an outsider.

"Understand" being the key word, here. To tose in the house, the rules make sense, and to the kids, they are outright fact. Even in their acts of rebellion, the thought to break the ruls never actually even occurs to them, because they don't realise the rules even can be broken.

When I said that Dogtooth was a film about lies, I was in fact speaking a half-truth. Dogtooth is in fact a film about belief. About trust. About systems. About the ruling class. The film presents an absurd reality to the audience in an attempt to make them question their own reality, and systems.