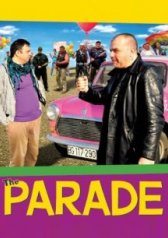 The Parade
Serbia, 2011, 115 minutes Comedy, Drama, LGBT
Is marriage between homosexuals normal? Should it be allowed? Can we accept same sex partners? Twenty-first century questions that remain unanswered and are being asked all over the world.

Although it is pretty normal in western and modern world to see homosexual partners walking down the street, holding hands, it is still not tolerated in many countries of the world. A film that won the Panorama Audience Award for Fiction Film at Berlin International Film Festival in 2012 focuses on exactly that.

Serbian gangster Limun, who is the last person you would think of when you’d need help for a gay parade, gets an offer to receive a free wedding design and dress for his fiancé if he accepts the job of protecting a group of homosexuals at the parade. Limun, being without any money, wants to make his girl happy and ends up without any other option. He goes on a trip and starts gathering a group of old criminal friends from all over the Balkans who are willing to protect a very risky homosexual gathering for some money.

The story is based as a comedy and it really makes you laugh until the last scenes, when it teaches a good message. Therefore it is not a usual comedy, but a comedy with real problems portraying the real mentality of the people from the Balkans. A comedy that still remains a tragic reality for too many people.

Director’s Statement: "Over the following decades, Belgrade has seen much "weirder" looks than our silly clothing style that was just a mere revolt against the Socialist life. No-one gets bashed anymore because of the clothes they wear or the music that they listen to. But even today, in Serbia 2011, these "healthy" looking young men beat up men and women of a different sexual orientation not only in parks but also on the streets of Belgrade."

Film Quote: "Look at all those people. It is not a question about being straight or gay anymore, this is [the] two faces of Serbia."