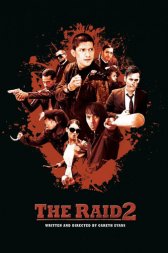 The Raid 2
Indonesia, 2014, 150 minutes Action, Crime, Thriller
A brilliant action film and possibly the best of the year, “The Raid 2: Berandal” is heart pounding. Director Gareth Evans manages to take the story and his style to a higher level in this film.

In this sequel to the 2012 hit “The Raid: Redemption”, director Gareth Evans manages to keep the story fresh and deliver amazing action sequences that can still wow and shock the audience. The Raid’s success has allowed Evans to create a film bigger than its predecessor with an array of new locations, a larger supporting cast and more sub-plots.

Picking up soon after the end of Redemption, Berandal (Indonesian for ‘thugs’) takes us out of the contained tower block, forcing our protagonist Rama (Iko Uwais) to work undercover to exploit corruption within the police force. He must gain the trust of the Bangun mob family while witnessing countless crimes and murders, even committing them himself. Delving deeper into this murky world, Rama eventually finds himself trapped and possibly abandoned by his own police force. Now he must do what it takes to break free.

Evans introduces a brilliant supporting female role ‘Hammer Girl’, a deaf martial arts master. Played by Julie Estelle, her eccentric character brings a lot of fun and blood to the film. With co-star Very Tri Yulisman as ‘Baseball Bat Man’, they are a dynamic duo that brings an unorthodox yet humorous and entertaining style to some epic fight scenes. Of course the choreography is absolutely mind-blowing.

The sequel stays true to the dark and gritty style we’ve seen before. Evans is becoming an auteur with his skills in filming dynamic shots of the specialized martial art ‘Pencak Silat’. Boundaries are pushed as we see fight scenes contained within a car chase alongside expansive gang warfare. Filled with intensity, delivering punch after punch Evans balances an epic crime family drama with pulse pounding action.
Like this Review?
Write your own review?
DooVOTE
Not for me
Like this Review?
Write your own review?
COMMENTS 0
Your Comment...