Image from: Attack of the Brainsucker (2012) 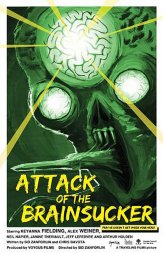 Attack of the Brainsucker
Canada, 2012, 14 minutes Horror
This film is sure to give you the chills!  While it was been touted as Brainsucker,  this clinical procedure called lobotomy is a psycho-surgery which aims to improve the mental conditions of persons, especially kids. In the case of this film, the girl seems obsessed with monsters and other horrific things, add to the fact that she has a brother who seems to be an influence, on the first place.  This prompts the parents to bring their child to the doctor so she can undergo the procedure.  Sadly though, the last scene will give a hint that the dilemma will continue,  as she was shown sitting beside her brother, which could just be a product of her still-unrepaired mind.  In a way, this film shows how the controversial surgery (which was banned  by the 1970s as can be noted from the statement at the end of the film)  was unsuccessful in bringing forth positive changes to people who experienced it.  Technically, the film's cinematography was laudable and the scenes  have a suspense factor. Do check out this film, folks.
Like this Review?
Write your own review?
Add to List
Not for me
Like this Review?
Write your own review?
COMMENTS 0
Your Comment...