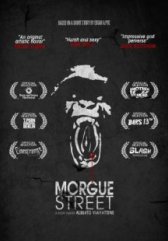 Morgue Street
Italy, 2012, 12 minutes Horror
Riveting and bloody!  This film presents ideas that border on sex,  drugs and the animalistic side of man.  The mother and daughter prostitutes, after spending the night with a man were terrorized and  sexually violated by an ape,  which turned out to be a kept animal of the man. I was at first wondering why the ape used a razor blade as it was something human-like to use an instrument when attacking someone, but a latter scene would show that the ape learned about it from his master.  For a film to be based from a work of Edgar Allan Poe,  Morgue Street has its strong points and it has achieved the suspenseful effects it hoped to offer.   Cinematography was commendable as well as the actors. Do check out this film.
Like this Review?
Write your own review?
Add to List
Not for me
Like this Review?
Write your own review?
COMMENTS 0
Your Comment...