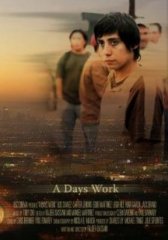 A Day's Work
USA, 2008, 17 minutes Drama
Not a dull moment while  watching this flick.  Highly commendable acting,  Luis Chavez  shines as Enrique, the immigrant worker hoping to save money to see his family again and bring them to America.  Eddie Martinez dazzles as Luis, another immigrant worker who's wary of cheapskates.  The film depicts the sad reality of immigrants who try their best to earn money and stay out of trouble  in the fear of being arrested or deported. Unluckily for Enrique, Luis and Rodrigo, things took a turn from bad to worst as  a result of a misunderstanding with regard payment for their services. Fortunately  for Enrique, he was able to escape trouble because of the goodness of his heart and in part because of the friendly connection he made with the son of the couple who hired him.  The cinematography was commendable,  noticed a handful of close up shots which gave viewers a clearer look on the actors' expressions, eyes and how they deliver their lines. A  highly laudable film by Dassani. This is a must-watch!
Like this Review?
Write your own review?
Add to List
Not for me
Like this Review?
Write your own review?
COMMENTS 0
Your Comment...