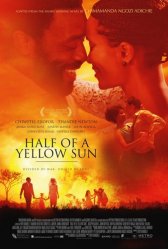 Half of a Yellow Sun
UK, Nigeria, 2014, 106 minutes Drama, Drama
A Nigerian writer who shot to prominence with her novel Purple Hibiscus (2003), Chimamanda Ngozi Adichie’s novel Half of a Yellow Sun (2006), set during the Biafran War (1967-1970) in Nigeria. Adapted to the big screen by Biyi Bandele in 2013, it stars BAFTA winners Thandie Newton and Chiwetel Ejiofor as the lead couple – beautiful, Western-educated Olanna, a daughter of the bourgeoius Nigerian elite, and Odenigbo, her idealistic lecturer husband. Ugwu (John Boyega), their houseboy; Kainene (Anika Noni Rose), Olanna’s cynical twin sister; and Kainene’s English journalist lover Richard (Joseph Mawle) are all richly realised peripheral characters that have significant parts to play in the trying times of historical conflict. Though all have their own grievances towards each other, the civil war looms larger than their differences and they come to rely on one another to survive as the new republic of Biafra attempts to establish and consolidate itself. The film premiered at the 2013 Toronto Film Festival to critical acclaim and had a worldwide release in 2014.
Like this Review?
Write your own review?
DooVOTE
Not for me
Like this Review?
Write your own review?
COMMENTS 0
Your Comment...