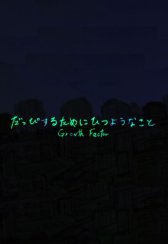 Growth Factor
Japan, 2014, 7 minutes Asian, Animation, Anime
This was truly interesting and one can see the repressed rebellion and suppressed emotions of teeners.  The lad, in his solitary moments become an imaginary  monster who  destroys cities as a way to burst out his discouragement over the bullying that he experiences.  Add to that his feelings for a girl that he just can't express.  The concluding scene shows him again in an imaginary setting destroying everything in sight and this happens while he sends a message to the girl on the phone,  which was  actually received by the girl.  Great musical scoring,   the animation that connotes disarray and he realness of the characters all contributed to the charm of this film.
Like this Review?
Write your own review?
Add to List
Not for me
Like this Review?
Write your own review?
COMMENTS 0
Your Comment...