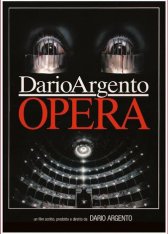 Opera
Italy, 1987, 107 minutes Horror
Possibly the best horror film about the experience of watching horror films ever made, Dario Argento's last truly great film is perhaps best known for the image of Cristina Marsillach tied up with needles taped under her eyelids. She, like the audience, is unable to look away from the brutal killings that take place before her. Director Argento is on top form throughout, filming the carnage with a beauty rivaling that of his 1977 magnum opus, Suspiria, and a clever self-awareness that offers far more insight than your average gimmicky work of 'meta-horror'.

You don't watch a Dario Argento film to see Oscar-worthy performances or a believable plot. You watch them for the often unbearably tense set pieces, the strange and claustrophobic worlds this master of horror creates and the way he uses them to explore the troubled psyches of his characters - and, in the case of Opera, the troubled psyches of himself and his audience. Even the unnecessary last-minute climax, probably the film's weakest section,closes things with a disconcerting but darkly humorous mental implosion (and a cheeky parody of The Sound of Music). If, as this film seems to suggest, bloodlust is an inescapable part of human nature then there are few places better to satisfy that unhealthy desire than this Italian horror classic.
Like this Review?
Write your own review?
DooVOTE
Not for me
Like this Review?
Write your own review?
COMMENTS 0
Your Comment...
LIKES 1
snakeeyes
snakeeyes