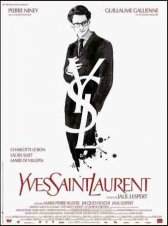 Jalil Lespert’s movie "Yves Saint Laurent" is a sincere and aesthetic biopic of the famous fashion designer. The actor Pierre Niney brilliantly plays the role of Saint Laurent and the movie covers both his incredible career and his tormented private life, from his debut at the head of Dior at the age of 21 to his death in 2008.

"Yves Saint Laurent" relates the path of a fashion avant-gardist, but it is also a love story between Pierre Berger, a skilled entrepreneur, and Saint Laurent, a manic-depressive genius. We see the two find their balance through the years, fighting against the hero’s mental disease but also against his drugs and infidelity abuses. Their relationship can actually be summarized by these words said to Yves Saint Laurent by his lover, "You have the talent, I am taking care of the rest." Pierre Berger himself, performed by the equally talented Guillaume Gallienne, approved the film and his support enabled the movie to be even closer to reality. In effect, the long-term companion of the artist allowed the director to use the original dresses of the fashion house as well as the apartments of the stylist.

However, despite all these ingredients brought together to produce a masterpiece, the movie fails to attain the finiteness of an unforgettable work. Pierre Niney really is Saint Laurent, everybody that knows the stylist’s diction and way of being can only be troubled by the interpretation of the young actor (only 24 years old). For its part, Guillaume Gallienne accuracy of acting is impressive. In fact, both of them are residents of the Comédie-Française, a French drama institution. Even though the actors are incredible, the movie is short of breath. It is hard to perceive the gift of Yves Saint Laurent. Most of the scenes show us a druggie bipolar with a dissolute life. Willing to show everything, Jalil Lespert doesn’t concentrate on any key moment of the fashion designer life.

"Yves Saint Laurent" still is a beautiful and entertaining movie in the genre of biopics, which is often despised. “Saint Laurent”, another biopic about the stylist, is about to hit French cinema screens in October 2014. The director Bertrand Bonello doesn’t have the approval of Pierre Berger, and perhaps this will allow him to a greater freedom of imagination.