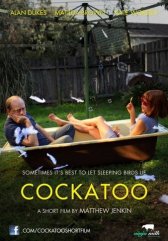 Cockatoo
Australia, 2012, 12 minutes Comedy
The film deals with situations directly and saw no need for symbolisms. The music, pacing and cinematography were outstanding. The cast’s exemplary acting was enough to fuel the film all throughout. Matilda Brown as Melanie the hired girl from the agency was very natural, perky, spontaneous and good-natured. Never mind if she wasn’t really successful in getting that English accent of the ex-girlfriend. Acting is indeed in her genes, being the daughter of actress Rachel Ward. Kate Worsley as the former girlfriend was stellar even as she only appeared on the latter part.  There is something about the way she talks, the way her eyes widen and the way she moves that makes her perfect for the role. Alan Dukes as Michael "owned the show" and the mixture of hilarity and seriousness in his face was brilliant. Something about him even reminds me of actor/comedian Rob Schneider, there is an uncanny resemblance in their eyes and in their movements. Dukes’ extensive background and experience in  television series like Water Rats (1998) and At Home with Julia (2011) were, in my opinion, all instrumental in molding him into a seasoned actor.  Yet, even as it is in the comedy genre there is  a tinge of drama in the short and the scene where Melanie was asking forgiveness from Michael as the former girlfriend (who didn’t really said sorry to him) was a touching scene. The title of the film was tricky and only by really paying attention will one realize why it is so.  And as the tagline goes, “Sometimes it’s best to let sleeping birds lie" in reference to the saying “let sleeping dogs lie” , sums up the entire situation of Michael.
Like this Review?
Write your own review?
Add to List
Not for me
Like this Review?
Write your own review?
COMMENTS 0
Your Comment...