Image from: Nighthawks In Bangkok (2013) 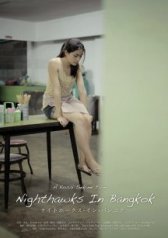 Nighthawks In Bangkok
Japan, 2013, 22 minutes Asian
Nighthawks in Bangkok delivers a language transcendent message of moving on. Proy, a young waitress, discovers a story of heartache from a drifter despite the latter's use of a language she doesn't understand. Her comprehension of the story is believable as the drifter's non-verbal acting is excellent. More than just comprehending, Proy seems to empathize with the drifter's story; in result, leading her to tears. The concluding scenes then show the difference of Proy's and the drifter's form of moving on. The viewer will then be left to judge which form is more effective than the other.
Like this Review?
Write your own review?
Add to List
Not for me
Like this Review?
Write your own review?
COMMENTS 0
Your Comment...