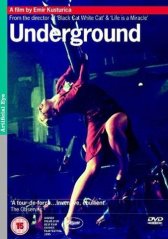 Underground
Serbia, Germany, 1995, 170 minutes Comedy, Drama, War
»A war is not a war until the brother kills brother«

Bila-Jednom-Jedna-Zemlja_2Crazy, sad, funny, brilliant and mad are all words that come to mind when describing this film. It is guaranteed be one of the craziest films you will ever see. Winner of the Palme D’Or (Golden Palm) at Cannes Film Festival in 1995, the film is often described as one of the great films of the last decade.

You can watch the film as a mad comedy, but the story in the film is actually a masterpiece after you realize it is a reflection on the history of Yugoslavia, since the beginning of World War 2 to the last separation war in Balkanian countries. Behind the veil of the comedy lies the hidden pain of whole generations of Balkans who had to go through horrible events in their lives – unbelievably some people on this land have suffered them all. World War 2, the Cold War, the war of Yugoslavia, the treachery of their own leaderships and the collapse of the country. The film actually shows the emotions of those who went through all those events and how it affected them. In the very last scene, a piece of land separates from the rest of the coast and it clearly reflects Yugoslavia, who was in all ways different than any other country in the world. The people were happy, they loved each other, country developed its own communist idea in mixture with capitalism, everything seemed to be perfect.

The film (which is also known under subtitle “Once Upon a Time Was One Country”) is one where you actually feel the country that it is coming from. The emotions and the culture in this film are represented so strongly that it will get under your skin. The story begins with the crazy friendship between Marko and Blacky, in the times when everything seemed normal. Soon World War 2 begins, and the film shows us some real screenings from the Belgrade bombarding. Marko and Blacky become rebels and fight against the German invaders. However Blacky loves Natalia, a Serbian actor that seems to like German general Franz… And being less a rebel, he just tries to win her back from Franz by killing him, which he actually does… Or it seems like he does. Strange events turn the story into Marko marrying Natalia, while Blacky lives with a community in the basemet of Marko’s house for 20 years, believing there is still war out there… Until, they escape…

The film will give you brilliant experience of the Balkan culture among with amazing soundtrack that represent the core of the culture. The film is even using some real recordings from German invasion, Belgrade bombarding and the most visited funeral ever in the human history of Yugoslavian leader Josip Broz Tito.

One of those films you must see before you die!