We will let you know once New Queer Visions: Men from the Boys is available to watch where you are

New Queer Visions: Men from the Boys will now be on your WATCHLIST when you go to MY HISTORY on your VIEW PROFILE page. 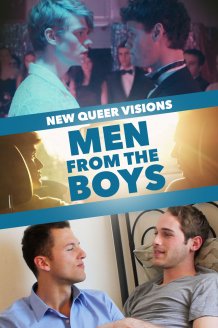 A compilation of short films exploring first love, revenge, new beginnings and more are unwrapped in this exciting collection from first-time directors from Portugal, Taiwan, Belgium, the UK and the USA.


CIGANO dir. David Bonneville (Portugal): Wealthy young Sebastian finds out he has a flat tyre and ends up accepting help from a Gypsy passer-by in the highly original short film 'Cigano'. When Sebastian offers to give him a ride home, their expected destination is not what it seems...


TALKING TO MY MOTHER dir. Leon Le (USA): A young man is trapped in a culture clash where traditions stunt his quest for personal happiness. Will Michael be able to face the truth with his loved ones - and most importantly, himself, before it's too late?


DAWN dir. Leon Le (USA): On an evening commute, Tye detects racism from another passenger's glance. In revenge, he decides to follow and confront the man.


SPILT MILK dir. James Dunstan (UK): 'Spilt Milk' is an unconventional and highly moving love story between two teens leading up to the night of their prom as they begin to understand the differences and similarities of love, sex and gender.


DINNER CONFESSION dir. Chih-Jen Lin (Taiwan): In the hilarious and sweet 'Dinner Confession', Che is having dinner with his mom, but all of a sudden, she takes out Che's secret magazine and starts to question him about it. However, she is interrupted by the unexpected visit of Che's close friend, Chun-Hao...


PITTSBURGH dir. Rory Dering (USA): 'Pittsburgh' is an intimate, emotionally turbulent yet occasionally light-hearted look at a young deaf man's relationship with his boyfriend, who isn't quite ready to come out of the closet.


KISS ME SOFTLY dir. Anthony Schatteman (Belgium): Seventeen-year-old Jasper lives in a small grey town in a family dominated by his dad, a cheesy singer called Lukkie Luk. Jasper finds it hard to come to terms with his father’s career and also struggles with the problems of adolescence, but eventually he musters up the courage to be true to himself and those around him in this heartwarming coming of age tale.