We will let you know once New Queer Visions: Lust in Translation is available to watch where you are

New Queer Visions: Lust in Translation will now be on your WATCHLIST when you go to MY HISTORY on your VIEW PROFILE page. 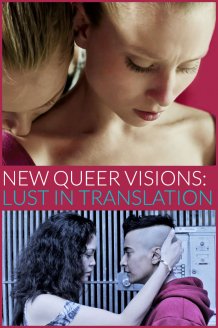 A compilation of short films exploring first love, revenge, new beginnings and more are unwrapped in the first of this exciting series of compilations, programmed by the New Queer Visions Film Festival strand.


SHIMI dir. Kate Maveau (Belgium): Keely is a lonely 16 year old teenager under the thumb of Sarah, a girl from her ballet course. When Keely meets Mairi, an eccentric and attractive girl who is Sarah's complete opposite, a frightening new dimension presents itself. Brimming adolescent fantasies, disciplined repression and shades of 'Suspiria' collide in this promising and beautifully captured film.


LOST IN THE WORLD dir. Xolelwa "Ollie" Nhlabatsi (South Africa): In this powerful revenge thriller, police officer Whitney's girlfriend befalls a terrible fate, so Whitney goes on a manhunt to find the perpetrators. Genders are reversed and genre tropes exploded with breathless energy and style in Nhlabatsi's exciting debut.


STEVIE dir. Chloe Jury-Fogel (USA): A hilarious and charming short film about Stevie, a dorky small town tomboy who experiences romance for the first time when a boy and his sister move into town. Prepare to laugh with and love this sensitively captured character portrait.


BLOOD & WATER dir. Emily Iason (USA): Flo, a beer-swigging young Brit with a passion for late nights, dive bars and one night stands has her world turned upside down when she falls for one of her professors. The potential for a deeper human connection proves irresistible, but is she ready for it? A sultry ode to lonely walks home after bright nights out.


TWO GIRLS AGAINST THE RAIN dir. Sopheak Sao (Cambodia): The incredible true story of two women who fell in love, survived the Khmer Rouge, became a family, and transformed a community. A heartbreaking and uplifting look at the power of the human spirit and the will to survive.


ALMOST OBSOLETE dir. James Cook (UK): A desperate and spur of the moment road trip to Brighton re-ignites Chris' bizarre, yet potent, relationship with her gay best friend Michael. A thoroughly modern look at queer relationships and friendships from the UK.