We will let you know once Love: Augmented is available to watch where you are

Love: Augmented will now be on your WATCHLIST when you go to MY HISTORY on your VIEW PROFILE page. 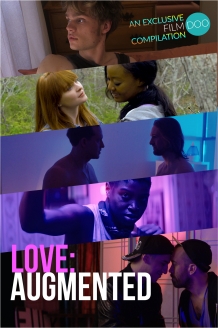 From Mattioli Productions, a trans-owned production company, these stories explore what it means to love without boundaries.

Trey feels small. He is gay, HIV-positive and lonely in NYC. All around him are hulking, powerful men, intimidating and challenging him everywhere he looks. Throughout his day, he obsesses over how to get BIG - and his insecurities keep him trapped in a cycle of trauma and abuse.


How to Fold a Fitted Sheet (dir. Tony Clemente Jr.)

Bellamy’s having a bad day. Watch her make it worse.

Darren is determined to find a connection. No matter how many people he has to go through.

Off a lonely Texas highway, a group of hustlers prey on the desperados who have come for sex, drugs and Mommas special milk. When a murderous cowboy rolls into town, a young trans boys quickly sees an opportunity to feed the physical and emotional hunger that has long been ignored by the neglectful Momma. As the boys begin to fall one-by one, Penny is caught between the Cowboys lustful rage, and the greed and corruption that Momma represents.