Here Come The Girls 3 will now be on your WATCHLIST when you go to MY HISTORY on your VIEW PROFILE page. 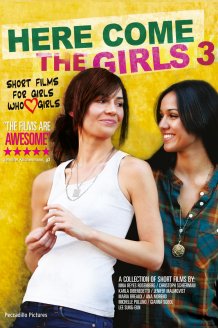 
Birthday - Dir. Jenifer Malmqvist (Sweden) 18mins: Sara prepares a surprise for her wife Katarina's birthday with the help of their daughter Johanna and their friend Fredrik. But on this early summer day, Katarina has something to tell her that will change their lives forever.


Looking For - Dir. Michelle Pollino (USA) 24mins: Tracy Lawrence has returned to the dating scene after a long absence. So, what does she do when love desperation arises? Why, she utilises a match making service that guarantees results! Or does it?


Lucha Dir. Maria Breaux (USA) 15mins: Set in 1982 against the backdrop of the insurgency in El Salvador, Lucha traces the plight of two women in love whose only respite from the battles raging against their oppressive government is the solace found in each other's arms.


Mosa - Dir. Ana Moreno (UK) 15mins: Mosa explores a young woman s internal struggle after being the victim of a hate crime rape in South Africa. Now in London, Mosa takes advantage of new opportunities to start a new life, but after feeling objectified once again, she breaks through and finally decides to live on her own terms.


Organism Dir. Nina Reyes Rosenberg (US) 13mins: The story of the on / off relationship of high school lovers Carmen and Jen. Sometimes surreal but always sexy, this short film places the spotlight on relationship blues in a palette of dayglo pink and blood red.


Fresh Air Therapy - Dir. Christoph Scheerman (Germany) 5mins: A couple of bickering women go to see their therapist to iron out their various squabbles. He has plans to bring them back together with a crafty gadget, but little does he know that a certain bad habit of one of the women will also come into play.


I Am Jin Young - Dir. Lee Sung-eun (Korea) 19mins: A cute and comic film about first love and sexual identity. Schoolgirl Jin s Young s mother brings home another woman and our model student finds herself coming to terms with growing up, a major crush on her mum s girlfriend and puberty.