We will let you know once Here Come the Girls 2: Gleeful Desire is available to watch where you are

Here Come the Girls 2: Gleeful Desire will now be on your WATCHLIST when you go to MY HISTORY on your VIEW PROFILE page. 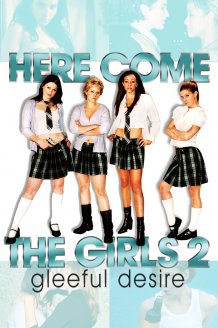 
D.E.B.S - Dir. Angela Robinson (USA) 11mins:Starring Alexandra Breckenridge, Shanti Lowry, Clare Kramer. A fun, sexy, rocking action spoof where D.E.B.S. special agents (clothes-obsessed and dressed in plaid, pleated skirts) are recruited through the SATs to fight their evil nemesis, Lucy in the Sky, who relentlessly kidnaps Special Agent Amy to have her not-so-evil-way with her.


Falling For Caroline - Dir. Christine Chew (Canada) 20mins:Starring Yanna Baizer, Shannon Currie To win the girl of her dreams, a klutzy young woman must overcome a wardrobe malfunction and the bad lesbian habit of over-processing a good thing.


Little Black Boot - Dir. Colette Burson (USA) 16mins:Starring Jane Lynch, Dania Ramirez, Carmen Plumb Goth-girl Cindy admires beautiful Laurie from afar, until the night when she dresses as a boy for the prom. Will this gender-bending Cinderella find true love when she leaves behind her little black boot?