Here Come The Girls 1 will now be on your WATCHLIST when you go to MY HISTORY on your VIEW PROFILE page. 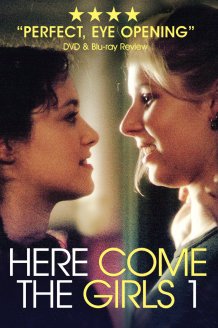 Wicked Desire - Dir. Angela Cheng (USA) 13mins: Starring Emma Angeline, Julia Weldon The Crabb family in Texas are thrown a curve-ball when they discover that daughter Jessica is moonlighting under a secret identity at school. Through the eyes of younger sister Bee, we witness the attempts of the family to make Jessica 'normal'.


Below the Belt - Dir. Laurie Colbert, Dominique Cardona (Canada) 13mins: Starring Nathalie Toriel, Cara Pifko, Tanja Jacobs Seventeen year old girls Jill and Oona explore their sexuality in between bouts of boxing and playfighting. Yet when Oona invites Jill back to her house, the sparring spills over into something much more intense.


Congratulations Daisy Graham - Dir. Cassandra Nicolaou (Canada) 15mins: Starring Barbara Gordon, Brenda Bazinet Seventy-year-old Daisy Graham is having a hard day. No one in her small town wants to let her forget about the big ceremony tomorrow, a ceremony at the local high school in her honour. But Daisy has more important things to think about than some ceremony - she's dug out her rifle, now all she needs is a box of bullets.


Dani and Alice Dir. Roberta Munroe (USA) 11mins: Starring Yolonda Ross, Lisa Branch Dani and Alice are coming to the end of a tumultuous relationship. As they prepare to leave their favourite girl bar, the ramifications of Alice's actions earlier in the night are brought up in a heated conversation behind the wheel of Dani's car, with tragic end results.


A Soft Place Dir. Suzanne Guacci (USA) 10mins:Starring Margaret Donlin, Meredith Riordan Two women conspire in a laundromat after finding themselves in a sticky situation. A bedroom tryst brought them together, but hubby's stained duvet threatens to tear them apart!


Private Life - Dir. Abbe Robinson (UK) 15mins: Starring Lucy Liemann, Jana Carpenter Ruth Ackroyd leaves the monotony of her work at her father's textile mill on a Friday evening and secretly takes the train to Manchester. There, she meets a man on the platform, but all is not what it seems...


Late Dir. Guinevere Turner (USA) 7mins: Starring Suthi Picotte Maggie has missed a date with a girl she really liked and will not return her best friend's phone calls. By looking around her apartment and listening to her phone messages, we learn why.