We will let you know once Boys On Film 14: Worlds Collide is available to watch where you are

Boys On Film 14: Worlds Collide will now be on your WATCHLIST when you go to MY HISTORY on your VIEW PROFILE page. 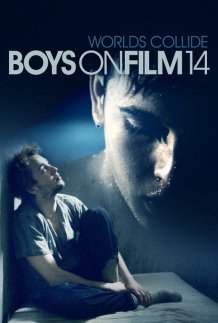 Want It dir. Lee Haven Jones (UK) 11 mins 2015 - An intruder breaks into a luxurious home. He wants it. When the owner returns unexpectedly, the tables are turned


Barrio Boy dir. Dennis Shinners (USA) 8 mins 2014 - It's a hot and sweaty summer afternoon in a macho Brooklyn hood and while cutting the hair of a handsome Irish stranger, a Latino barber secretly falls in love.


Aban and Khorshid - dir. Darwin Serink (USA) 13 mins 2014 - If you only had a few hours left to live, what would you share with the love of your life? Together Aban and Khorshid explore this question during the hours before sentencing for their crime of loving each other.


I Love Hooligans - dir. Jan-Dirk Bouw (Netherlands/ Belgium) 13 mins 2013 - A football hooligan feels unconditional love for his club. However, being gay, he has to hide his identity in order to survive in the world that is so precious to him.


The Violation dir. Christopher Bradley (USA) 13 mins 2013 - Oscar has a thing for his neighbour, Tina. Tina s brother, Mickey, has a thing for Oscar. When house-sitting for the family one day, Mickey invades Oscar s bedroom.


The Package - dir. Rafael Aidar (Brazil) 18 mins 2012 - At a new school Leandro and Jefferson form an instant attachment and soon realise that theirs is no ordinary friendship. But young Jeff has something to reveal.


An Afternoon - dir. Søren Green (Denmark) 8 mins 2014 - Today is the day! Mathias is in love with Frederik and now he s going to tell him just that... But when the moment of truth arrives is he brave enough to make the first move?