We will let you know once Boys On Film 8: Cruel Brittania is available to watch where you are

Boys On Film 8: Cruel Brittania will now be on your WATCHLIST when you go to MY HISTORY on your VIEW PROFILE page. 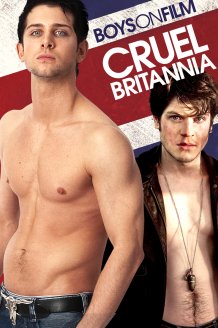 All Over Brazil - Dir. David Ward - 10mins: It's the summer of 1974 and Scotland face Yugoslavia in the group stage of the football World Cup. But Stephen (Iain de Caestecker) seems more interested in the world of Glam Rock than football...


Nightswimming - Dir. Dominic Leclerc - 14mins: Runaways Luke (Harry Eden) and Ellen are caught breaking into a swimming facility as they only want a warm place to sleep. The watchman lets them stay on the proviso that they don't break anything, and so begins an emotionally charged situation between the trio.


I Don t Care - Dir. Harry Wootliff - 25mins: In the tumbleweed coastal retirement community of Porthpunnet, Luka (Iwan Rheon) cares for his bedridden mother. One day he meets Dan, a young man who lives in a camper van and shares his interest in art. Initially he sees Dan as a kindred spirit until Dan proves to be gay.


Spring - Dir.Hong Khaou - 13mins: A young man meets a stranger to indulge in a secret bout of S&M, an experience that will change his life forever.


The Chef s Letter - Dir. Sybil Mair - 14mins: In the early morning hours, a chef (Jonathan Firth) struggles to write the letter that could overturn his ordered life. Entering his kitchen, he struggles to make a beeline for his sous-chef (Layke Anderson).


We Once Were Tide - Dir. Jason Bradbury - 18mins: On the windswept southern coast of the Isle of Wight, Anthony, torn between his boyfriend and dependent mother, must realise that to love something is to give it away.


What You Looking At? - Dir. Faryal - 10mins: Two very different people in the London borough of Lambeth - a drag queen (Michael Twaits) and a woman in a burka. Only in a lift would they ever cross each another s path. But these two have more in common than they first thought.


Man and Boy - Dir. David Leon, Marcus McSweeney - 19mins: A man (Eddie Marsan) invites a boy into his flat and offers to take pictures of him. To most this would seem suspicious in the extreme, to the few it is an innocent offer of friendship. Which way do you see it?


Diana - Dir. Aleem Kahn - 11mins: On the day after the Princess of Wales death Mohit, an Indian pre-op transsexual, goes on an emotional journey set against the backdrop of a day that shocked a nation.