We will let you know once Boys On Film 6: Pacific Rim is available to watch where you are

Boys On Film 6: Pacific Rim will now be on your WATCHLIST when you go to MY HISTORY on your VIEW PROFILE page. 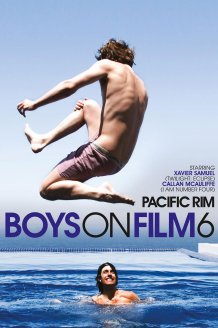 Drowning - Dir. Craig Boreham (Australia) 20mins: Things are changing for Mik. His world has been turned upside down by the sudden death of his big brother forcing him to redefine his place in his family and the world. The one solid thing in Mik s life is his best friend Dan. But Dan has a new girlfriend...

Franswa Sharl - Dir. Hannah Hilliard (Australia) 14mins: On a family holiday to Fiji, twelve year old Greg s creative pursuits fail to amuse his father. Setting out to win back his admiration, he enters himself into a competition with a difference....


Teddy - Dir. Christopher Banks (New Zealand) 15mins: An earnest Londoner attempts to rekindle an old relationship while on holiday in New Zealand, but a faded old teddy bear from the past ultimately decides his fate.


LOVE, 100°C - Dir. Kim Jho Kwang-soo (South Korea) 22mins: A hearing-impaired boy, Min-so is gay, and he likes his classmate, Ji-seok. One day, Min-so impulsively has sex with a man who works in a public bath, an experience that lends him a new-found confidence, but at a heavy price.


My Last Ten Hours With You - Dir. Sophie Hyde (Australia) 15mins: At 6am Jeremy and Mark will go their separate ways. Their last ten hours together over one hot night will be punctuated with friends, fights and frustrations as they wait it out, each dealing with the loss of love in their own way.


Ron the Zookeeper - Dir. Darcy Prendergast (Australia) 7mins: With only one male grey panda left in the entire world, Ron the zookeeper is sent in to get a sperm sample, no matter what. Eponymous Aussie artist Darcy Prendergast s first wacky claymation creation (before Mary and Max), Ron The Zookeeper was banned from his graduation premiere!


Ajumma! Are You Krazy??? Dir. Brent Anbe (Hawaii, USA) 25mins Fuelled by their schoolgirl hormones, three Ajummas , aka Korean soap fanatics - the lovable Judy, Susan the gruff-tough one, and Amy the sassy tart - go on a hilarious journey to try and meet Korean superstar Michael Park by stealing his itinerary, breaking into his hotel room, and sneaking on to his music video set. However, they didn't factor in the competition!